Entry Fee: $5 per flight (no limit on number of flights)

Make sure to declare your flight as “2,020 Contest” flight prior to launch.

Build and fly a model rocket that will reach as close to 2,020 feet AGL without going over.

The rocket must be stable and constructed with materials approved by NAR or Tripoli, you may also use a kit.

Cash prizes for First and Second place will be a % of the entry fees collected.

New launch log system updates are underway.  Here are some of the highlights.

The number of unique flyers has been added to the by-month charts.

The fastest flight.  This new leaderboard applies to flight data beginning in 2020.  Historical flight data did not record speed as a separate field, the chart is not available for events prior to 2020. 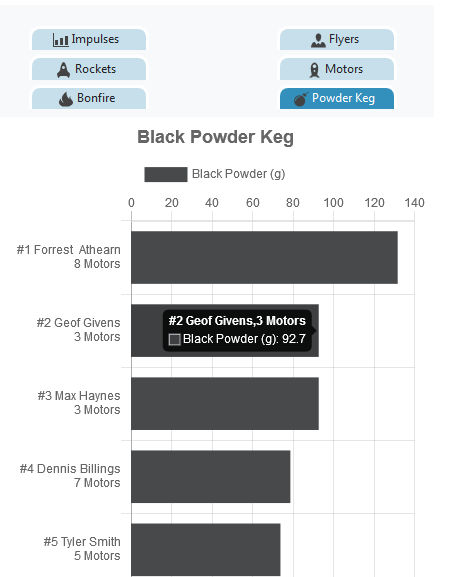 Many of the charts have been updated to include additional information, such as the number of flights, or the number of motors that contributed to an individual rank on a given leaderboard.

Now you can see more detail, for example, in 2013 the bonfire was won with just 4 motors!

A large amount of the work that went in to the site over the last month was to improve the flight card record entry screen(s).  These pages are only available to the club president and a handful of other individuals.

At long last, the Flight Logs are back online.

The new system introduces several new features including visual reports for each year, and for each launch event.

$10 Re-Entrance Flyers may re-enter the contest for an additional $10 if they are disqualified.

Make sure to declare your flight as an “Alphabet Contest” flight prior to launch.

There will be a contest registration sign-up sheet at the flight table.

Deposit your entry fees with the club’s Contest Director.

You may use a different rocket for each flight, or the same rocket for multiple flights as you desire.  Each flight must be declared prior to launch as a contest launch, and designated on your flight card.

Flyers who are disqualified, and buy-back-in, will start at the motor that they were disqualified at.  For example, if your E flight failed, you would continue the contest at an E impulse motor.

If you have a failure resulting in damage that prevents a second flight without repair, or you are unable to recover the rocket, then your last successful flight will be recorded as your final flight for the contest.

Multiple stages may be used to accomplish multiple letters of the alphabet in a single flight.  You must recover all stages successfully.  Limit up to and including 3-stages.

Contestants must progress through the alphabet contest sequentially.

You cannot skip any letters of the alphabet, flights with multiple motors that are not sequential are allowed, but you can only achieve a single letter in the alphabet contest if your staged-motor configuration is not sequential.

Ignition sequence does not have to be alphabetical.  You may fly a staged rocket that has a C as the booster, and a B as the sustainer (assuming you have successfully completed your A impulse flight).

The total impulse of the cluster can be substituted for the impulse letter in the alphabet.  For example, a cluster of 6 (six) E motors @ 40ns each would have a total impulse of 240ns, which is equivalent to an H motor.

All launch events will be conducted using nationally approved/accepted range safety practices.  The launching of rockets on NFS land is normally prohibited under a Forest Service Region 2 fire regulation.  The issuance of NCR’s permit allows launches to take place by exempting the Holder from that regulation for approved launch events only.  All launches, other than those conducted by the Holder during approved launch events, are outside the scope of this permit and are prohibited by Forest Service regulations.